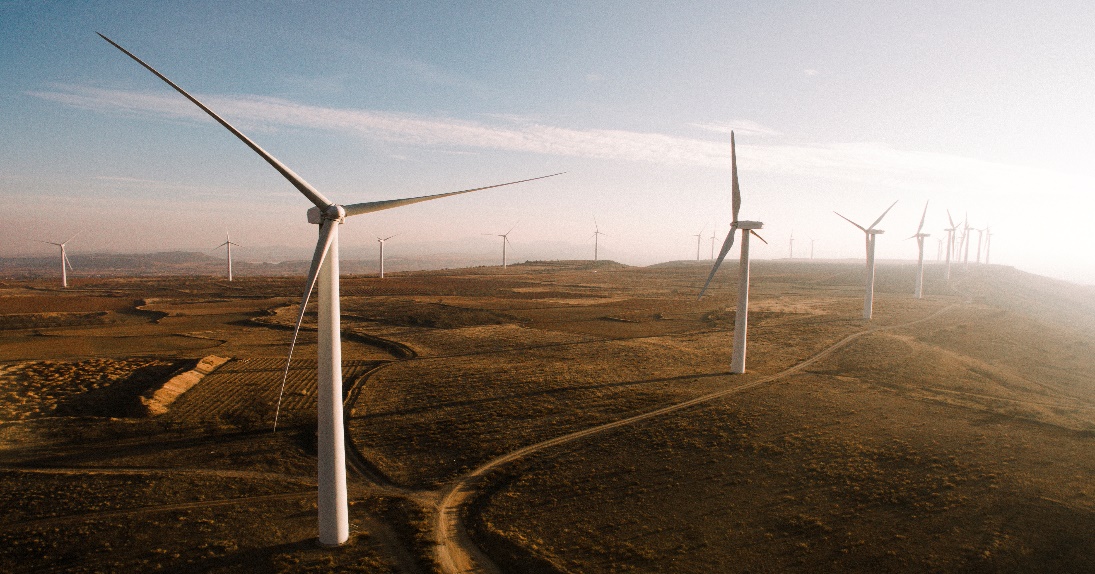 The large-scale movement of air.

The base structure that supports and elevates a wind turbine rotor and nacelle.

A structure containing group of instruments (including anemometers and wind vanes) used to measure wind speed, wind direction, and temperature at various heights above the ground.

The structure at the top of the wind turbine tower that houses all of the generating components in a wind turbine, including the generator, gearbox, drivetrain, rotor shaft, and brake assembly.

Windmill-like structures specifically developed to harness kinetic energy of wind and convert it into electricity. Wind Turbines are an outgrowth of Windmills which are similar structures that capture and convert the bulk movement of air (e.g. wind) to generate mechanical energy for things other than electricity (to grind grain, pump water, etc.)
Wind Farm A large number of wind turbines built close together, which functions as a single power plant and sends electricity to the grid.

A conveyance by a landowner to a wind company of an exclusive right of possession to a specific area of the landowner’s real estate where a wind turbine is located. A wind lease is granted for a specific term of years in exchange for an agreed upon compensation amount.

A right granted by a landowner to a wind energy company to use a landowner’s property for the specific purpose of building and operating a wind farm. An easement is granted, in exchange for an agreed upon compensation amount. Although easements are legally distinct from leases, many times wind agreements tend to use the terms interchangeably and so an agreement titled a Wind Easement may in fact be a Wind Lease or contain terms that make it a hybrid of both a lease and an easement.

Wind companies compensate landowners in installments throughout the term of the lease in the form of Wind Royalty Payments,
Fixed Rent Amount or A combination of both (e.g. the greater of the Fixed/Minimum Rent or the Royalty Payment Amount)”.

A compensation structure where the wind project owner pays the landowner a percentage of the revenue received from selling the electricity produced by the Wind Farm. This percentage is negotiated between the landowner and the developer.
Royalty payment amounts fluctuate during the term of the wind lease based on:

The Project’s Offtake Agreement (e.g. the arrangement the Project Owner has in place for selling the electricity generated by the Wind Farm).

The consistency of the Wind Turbines ability to generate the expected amount of electricity (e.g. either caused by mechanical failures or the wind turbine itself or other circumstances that require the project owner to shut down the project’s operations to accommodate regulatory, utility or other parties work/repairs/upgrades within the project’s vicinity.

The variances between the anticipated and the actual amount/speed of wind the wind resource during the projects.

Wind leases with Royalty Compensation structures often include language that protects the landowners against complete downside scenarios by guaranteeing that if the Royalty amount owned is below a certain amount, then in such cases the landowner will at least be paid some pre agreed upon minimum rent amount.

Wind leases with a fixed rent arrangement require the project owner/developer and landowner to agree upon a fixed fee; per turbine, per unit of land, or per megawatt (MW) of installed capacity, to be paid by the developer on a monthly or yearly basis.

Provides landowners with an option to receive an immediate lump sum payment in exchange for assigning all future rents owed with respect to each turbine on their land. The landowner maintains 100% ownership of the real estate.

When lump sum offers are made and accepted, the buyer pays all cash upfront to the landowner and in turn owns all risks and rewards of the wind lease. In other words, if the lease ends up paying less than expected or the project owner terminates the project, then the buyer bears that loss and does not have any right to a partial refund of the lump sum payment from the landowner.

The page you requested could not be found. Try refining your search, or use the navigation above to locate the post.

Any cookies that may not be particularly necessary for the website to function and is used specifically to collect user personal data via analytics, ads, other embedded contents are termed as non-necessary cookies. It is mandatory to procure user consent prior to running these cookies on your website.